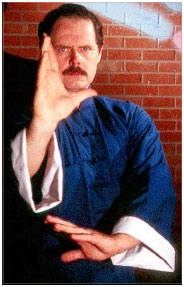 The art of Jiulong Baguazhang (pronounced Jee-ohLung BaGwaJong) or Nine Dragon, Eight Trigram Palm (boxing art) comes to us by way of the Li family of Sichuan province, China. It is but one facet of the Li family’s martial and health exercise system called Daoqiquan (pronounced Dao Chee Chewen) – which can be interpreted as “Martial Way of Vitality”

The history of Daoqiquan weaves a story about a wandering Tibetan monk, Lama Zurdwang (1530 -1620) from Quamdo Tibet. Lama Zurdwang is said to have been a student of the 5 Excellencies: philosophy, poetry, painting, medicine, and martial arts sometime during the Ming Dynasty (1368 to 1644 AD).

Legend has it that Lama Zurdwang left his native Tibet on a quest to learn more of Daoism, Buddhism, and Chinese martial arts. During his travels through China, Zurdwang is believed to have stopped at many Daoist and Buddhist monasteries, where he learned methods of healing, herbology, and various styles of Chinese martial arts.

Lama Zurdwang eventually came to take the Daoist name Dao, Long-Ren and eventually settled in the village of Daofu, in Sichuan province, where he became the tutor of a family named Li. He taught them the many skills he had learned over decades of travel and study. In this way, the arts of Dao, Long-Ren passed into the hands of the Li clan and over the years the family became known as highly reputable bodyguard/wagon masters, or Baobiao.

Each patriarch of the clan learned the original methods of Lama Zurdwang’s martial arts and combined them with other styles and combat methods they came across that proved useful. Over numerous generations, the Li family developed their own interpretation of martial art styles such as Taijiquan (Tai Chi), Xingyiquan, and Baguazhang based on the martial principles they had learned from Dao, Longren. After many changes of name, their art came to be known as Daoqiquan.

Baguazhang was incorporated into the Daoqiquan system by Master Li, Ching-yuen, who named it Jiulong, or Nine Dragon, Baguazhang, in the late 1800’s or early 1900’s, though it is not certain where he learned it. It is possible that the Li family system of Jiulong Baguazhang has the same roots as other systems of Baguazhang which developed from the lineage established in Beijing by the recognized founder of the art, Dong Hai-chuan. Whatever the case, Jiulong Baguazhang was initially taught only to Li family members and, as such, its connection to the lineage of Dong, Hai-chuan is uncertain. From the Li family it was passed on to the first Westerner, the current Shigong (grandfather teacher) of the art, Dr. John P. Painter, who has taught the method to thousands of students across the world.