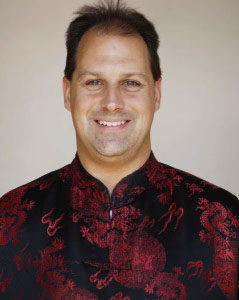 Xiangdao (guide/leader) Steve Bialon first began studying Kung Fu in 1985, and over the ensuing years he explored numerous martial art styles, such as Tae Kwon Do and Hapkido, Aikido, and Kendo, as well as several Kung Fu systems including Northern Shaolin and Southern Hung Gar animal styles. Upon being exposed to the three main “Internal” arts of Taijiquan, Xingyiquan, and most especially Baguazhang, Steve narrowed his focus of study and eventually came to regard Baguazhang as his primary method.

For nearly ten years, he was the owner and head instructor of United Martial Arts, formerly in Plymouth, MN. In 2006, he chose to ‘fold his hands’ for a time and step back from the full-time occupation of teaching martial arts in order to spend more time focusing on building his acupuncture practice though he continued his own training and to teach martial arts on a private basis.

In 2009, he began studying under Shigong Dr. John Painter in the Li family style of Daoqiquan, of which the art of Jiulong Baguazhang is the primary facet. Under the auspices of Shigong Painter, Steve is teaching the beginning courses and is striving to carry the Daoqiquan art into another generation.